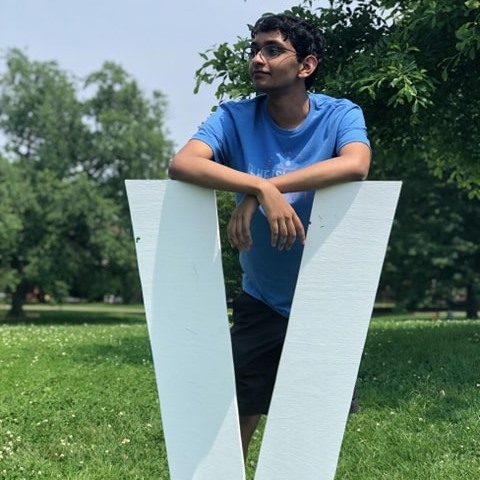 Vishwa Shanmugam is a rising sophomore at the University of Maryland. A science and literature player, he was the fourth-highest DII scorer at ACF Nationals 2019, where he was the lead scorer on Maryland B. ACF representative Olivia Lamberti spoke to him about his first year in collegiate quizbowl.

OL: Tell me a little bit about your time in high school quizbowl. What was that like?

VS: I started playing my junior year [at Downingtown STEM Academy]. That year, we ended up at HSNCT and went 5-5. Then that summer, me and my teammates Anish and Rohan decided to study a ton, and we went on to finish t-8 at HSNCT. It was a really fun journey.

OL: Despite that experience, was there anything that surprised you about the transition to collegiate quizbowl?

VS: I had been studying college sets during my high school playing. But playing a set as hard as ACF Nationals came as a bit of a shock. Going from high school to college, it’s important not to get discouraged. It can seem really hard at first. But that’s pretty similar to people’s first encounter with high school quizbowl. You’re just reliving that journey.

OL: How is your studying method adjusting to that new difficulty?

VS: I’m definitely more willing to read random things. You read whatever you can get your hands on. And I’m shifting from packet study to textbook study for science.

OL: How does textbook study work for you? Any specific recommendations?

VS: You can’t go wrong with Campbell’s for biology, or anything else [in Jacob Reed’s doc]. A lot of textbook study for me is opening up the table of contents and deciding I want to learn about a topic and flipping to that page. I don’t go cover to cover. It’s often just a roadmap of topics I should look at.

OL: Outside of studying, were there differences in the college quizbowl social sphere?

OL: How did those team dynamics work out for you?

VS: We definitely had our patches where we were figuring out how to play with each other. The biggest thing for me was being explicit with my teammates and communicating. As far as shifting teammates goes, it’s definitely maximizing your synergy together. And, next year, I’m probably going to be the fourth scorer on my team. It’s going to be a bit of a mentality shift.

OL: Do you have any role models on Maryland you’re especially thankful to play with?

VS: The person I’m closest to is Graham [Reid], because he’s also a science player with humanities generalism. We spend a lot of time talking about cool science things. Playing with Graham, it’s very clear he knows what’s going on with fundamental science topics, which has inspired me to try and understand higher level topics myself.

OL: Do you have any favorite team memories?

VS: [My teammate] Jack [Lewis] has some very eccentric food tastes. His go to meal is a nice plate of rice with some mayonnaise on the side. And our games against Maryland A were all really fun. We would always trash talk during the game. Everyone on A this year was just really great.